A Typical Day on the Slopes with Blue Angel Snow

I was recently asked by a friend, who’s son is entertaining the idea of learning to snowboard, what a typical day looks like at our youth ski and snowboard camp. She knows me well and is familiar with what we do; however, she claimed to be “one of those moms” who would be too nervous to let her son head off to the ski slopes with anyone besides mom and dad, which isn’t likely to happen because they are not “snow” people. So we sat down and I explained to her what a typical day with Blue Angel Snow looks like. And here’s a glimpse of our conversation:

It begins with program enrollment, which usually occurs between back-to-school time (September) and the pre-holiday season (early December). Some of our buses do fill up quickly based on demand, which varies from year to year. For example, this year we have two bus locations that are filling up fast and will likely have waiting lists before December. If someone (like my friend) happens to be undecided and still would like to find out more information before committing, they are welcome to attend any of our program orientation meetings.

Orientation meetings are held in early December and January in each region (Nor Cal Schedule So Cal Schedule). Participants and at least one parent or legal guardian are asked to attend a meeting of their choice in order to properly prepare for the first program day. As noted above, interested parents/participants may also attend to learn more; however, in some instances, the bus may be full by the time the meetings occur. The orientation meetings are a thorough overview of how to prepare, what to expect, etc. We review our Program Guide during this time, fit participants for their complementary Bern Snow helmet and answer questions. Both parents and participants leave these meetings feeling ready to hit the slopes! 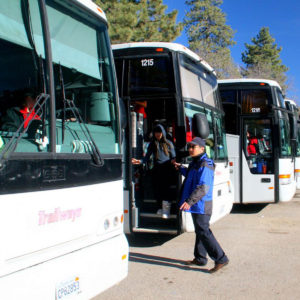 When Day One rolls around (January 21, 2017), participants head off to their assigned bus departure locations very early in the morning (between 5:15 AM and 7:00 AM, depending on your location), where they will be greeted by one of our volunteer parent chaperones. Chaperones help ease the transition from early morning drop off by mom or dad to boarding bus with new friends. They assist with loading gear and getting situated on the luxury charter bus, just in time to watch a movie! Once all are aboard, it’s off to the slopes for a 1.5-3.5 hour bus ride, depending on your location.

Just prior to arrival at the resort (So Cal Nor Cal), chaperones announce that it’s time to start gearing up for the slopes, helping anyone requiring assistance in putting on boots, clothing layers, sunscreen, etc. Once ready, the young skiers and snowboarders are assisted off the bus to grab their ski and snowboard equipment and escorted to their pre-assigned ski and snowboard lesson groups. The groups are based on age and ability, with each class being assigned to one professional ski or snowboard instructor for the five Saturday camp. Ideally, the groups remain in tact for all five program days; however, some may move up or down, based on the recommendation of the ski school supervisor.

Once instructors and participants are matched up at the ski school staging area, the groups head off for a day of learning and fun on the slopes with their new classmates and coach. The instructors enjoy coaching Blue Angel Snow participants since they get to work with the same skiers and snowboarders for five consecutive Saturdays (skipping one holiday weekend). The groups remain together all day, including during lunch (provided by Blue Angel Snow). We  see a measurable amount of progression during a season, which leads many to return year after year, ultimately advancing to the top level group.

At the end of each day on the slopes (between 3:30-3:45 PM), the groups are led by their instructor back to the bus for a prompt 4:00 PM departure. Our Northern California program participants enjoy a dinner stop along the way home due to the longer drive time; however, Southern California participants are back home just in time for dinner!

After explaining what the typical day looks like, I could tell my friend still was on the fence. It is such a big commitment, I’m nervous, he will be gone from sun up to sundown, participating in a sport I know nothing about, etc. I get it. It is a big commitment, and skiing and snowboarding, like all action sports, come with risk. I can’t and would never talk anyone into making any parenting decisions. It’s not who I am. But what I do know is that we have done everything in our power to create a turn-key, positive camp experience for both parents and participants alike. I firmly believe that these two amazing winter sports can be “game changers” for many kids. Our mission is “to provide positive snow-riding experiences for youth that will enhance their personal and social growth. Blue Angel Snow fosters this development by emphasizing athletic development and independence in a supportive, fun and friend-filled environment.”  As parents ourselves (my husband and I have been operating this program for 24 years), we care as much about each and every child/teenager while in our care as we do our own children and we will continue to operate Blue Angel Snow at the highest standards for those who choose to attend ski and snowboard camp with us this winter!

Heidi Emery (pictured above with her mom, daughter and niece)
Founder/Director